skip to main | skip to sidebar

The Hero of Strangerville (Sims 4 one-off) 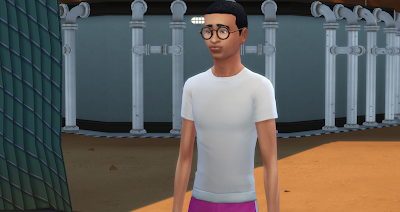 Sometimes, history calls ordinary people to do extraordinary things, to make their mark on the tapestry of time.  It requires of them to go beyond what they perceived they were capable of being and doing, to step out of obscurity, forcing them and their talents into the limelight, getting out of their comfort zones.  One never knows when it it is his turn, or how he will respond when it happens. Sometimes, the wrong person arrives at the right time. 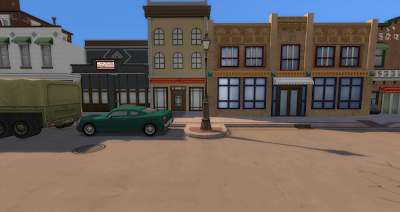 The history of a small desert town between Oasis Springs and Lucky Palms called Strangerville, turned on one such ordinary young man, a San Myshuno transplant with the big-city tastes to match.   If Strangerville were to script its perfect hero, Ezra Uriel Woodley would not fit the bill. 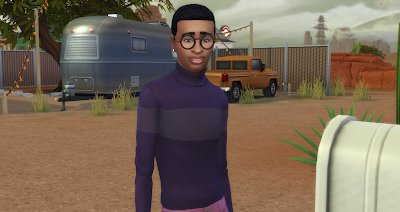 Ezra was the younger of the two sons of Joseph "Big Joe" Woodley, a charismatic assemblyman in the San Myshuno legislature, widely regarded as Mayor Victor Feng's right-hand man.  Big Joe had a booming voice and a larger-than-life presence.  In his spare time, Big Joe was the senior pastor of the Llama View mega church.
Unlike his father, Ezra was thin and frail, and compared to the tremendously popular shining light that was his older brother, "Lil Joe," or Joseph Woodley Jr., he struggled.  He had no friends and kept mostly to himself.  There were whispers about his mannerisms.  He was 'odd.'
This started to change somewhat when Ezra got to high school, and he became interested in computers and science.  He joined his high school's robotics team.  He learned how to code.  It became clear that he was very, very bright indeed.  He could talk a hole in your head and was in possession of a wicked sense of humor.  After graduating from high school with honors, he enrolled in Sims University's Institute of Science and Technology (SUIT).   And how he wound up in the desert outpost in the first place. 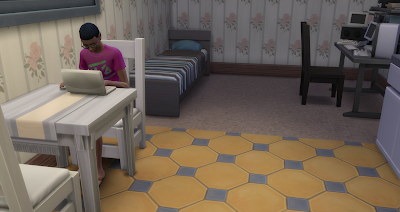 Strangerville was not Ezra's first choice - or even his second.  He would have been just as comfortable back home, surrounded by his collection of action figures.  A dusty, dry desert with no lights and hardly any rain?  Not Ezra's idea of comfort.  But for a city boy with expensive tastes from his upper-class upbringing, Ezra proved himself adaptable.  He rented a cozy little hamlet in a mobile home park just outside of the town square.
Ezra had advantages few others had.  He needed little sleep, so he could spend his days and nights on attempting to solve the mystery that had engulfed the little hamlet. He also had some resources owing to his upper-class upbringing and excellent private school education. 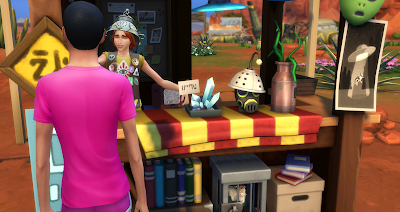 Ezra's job also required him to talk to people.  A lot of people.  Something he found surprisingly easy to do, since no one from San Myshuno was here. He also had to purchase items from the curio shop, run by one Erwin Pries, who seemed to know everything there was to know about conspiracy theories. 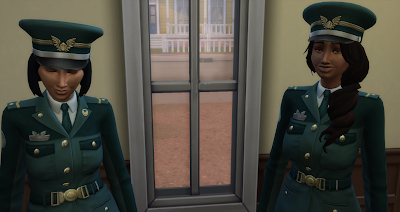 Even hardened military women loosened up in his presence.  He may not have been traditionally bulky, but he was wiry and physically strong. 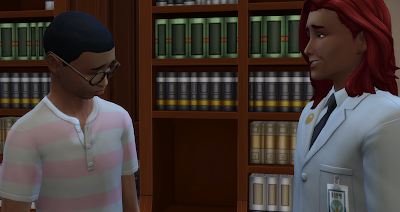 Gonzalo Novak was a scientist who had been working at the facility.  "A few weeks ago," Gonzalo told Ezra, "an explosion at the lab caused everything to go haywire."
"What kind of explosion?"
"We're not sure.  All we did was try to contain the damage.  There are these strange plants everywhere," Novak told him, "and they grow spores, causing sims to be sick."
"Is this just in Strangerville or are other places in danger?"
"If this isn't stopped, other places will be in danger." 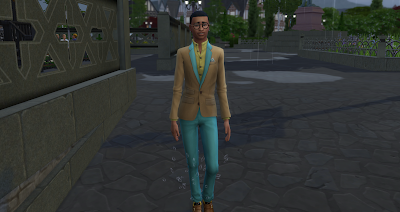 Ezra's deadly serious quest did not mean his life was completely joyless.  Occasionally other sims he'd have met on his travels would invite him out to eat dinner, usually in Windenburg at its fine eatery owned and operated by the Bjergsen family.
Once, he was invited to eat by a conspiracy theorist called Lorna, and Lorna failed to show.  Nonplussed, he walked back to the bus terminal in the rain to take him back to Strangerville. 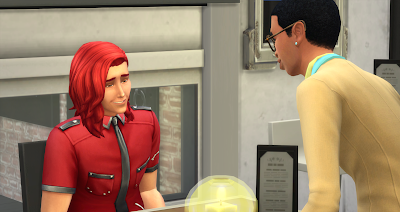 A more successful dinner occurred three nights later, with Gonzalo, who revealed to Ezra that his father was of Czech descent and his mother was Brazilian - hence his name.  He also gave Ezra his keycard to get inside the lab. 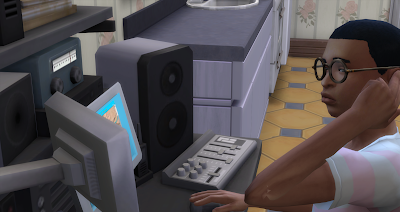 Over the next few days, Ezra began putting his considerable skills to work.  First, he planted bugging devices on unsuspecting sims, so that he could hear their conversations. 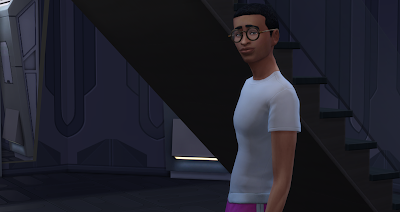 Next, he began spending most of his time at the secret science lab in the crater on the other side of town, attempting to come up with a vaccine with the spores he'd collected. 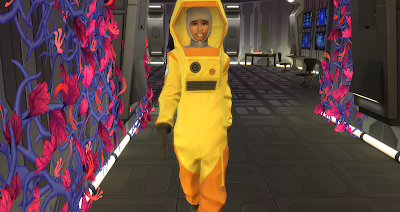 Eventually, he came face to face with the source of the infection - a monstrous biological specimen tucked deep inside a lab, grown far beyond its confinement, an experiment gone horrifically wrong. 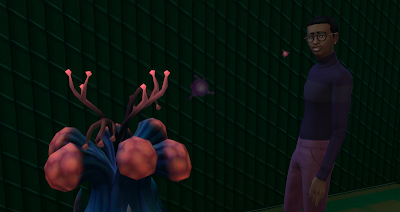 After seeing the freakish flora up-close and personal, Ezra began to collect spores from it in order to develop a vaccine to eradicate the sickness which had resulted from it. 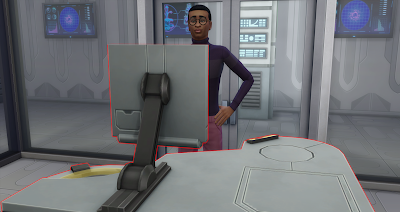 He had eventually collected enough spores (fifteen in total) to attempt to develop an experimental vaccine. 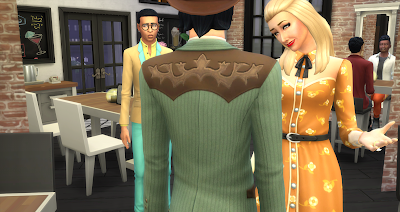 The vaccine needed to be tested, so he did so on three unsuspecting sims, including Strangerville's mayor, Ted Roswell.  This was not the normal manner a visiting politician's son would acquaint himself with the town's mayor.  But then again, nothing about this situation was 'normal.'
And since Ezra wasn't too keen on flirting, he didn't take too well to Ted's wife Meredith doing PDA in a public restaurant.
As far as is aware, this was Ezra's only social faux pas. 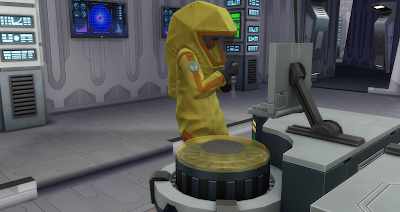 After successfully testing three sims, he began to make the vaccine for real, spending hours in the lab concocting the medicine.  Would it work?  Would it eradicate the problem once and for all? 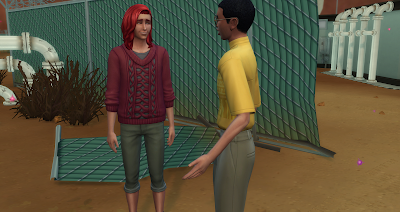 After vaccinating three sims, he then recruited them to help him kill the plant.  The first person he recruited was Gonzalo, who of course said yes. 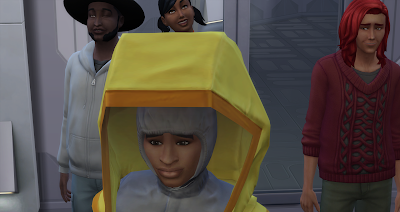 The other members of his team were Roman Laughlin, another scientist, and Lorna - I forgot her last name - the girl who stood him up for his dinner came through for him on this one.
The four of them held a brief strategy meeting in one of the spare lab rooms.  Gonzalo was a bit tepid, wanting to approach the monstrous plant with caution.  Roman wanted to attack. 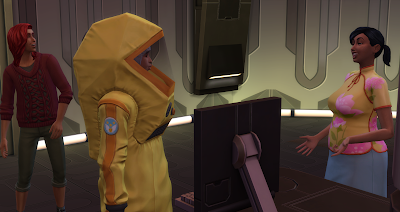 Lorna's attitude was, "I just want to be rid of this darn thing!" 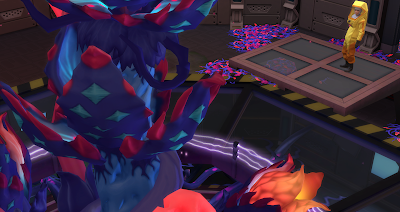 Finally, the fight began in earnest as Ezra stared down the overgrown shrub. 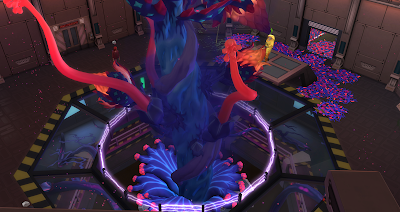 He ordered his squad mates to be careful in order to minimize the risk of them getting infected, as they were not wearing hazmat suits. 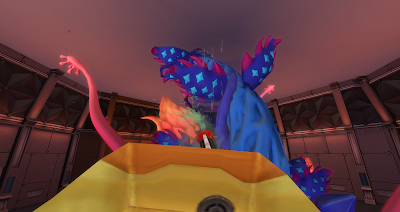 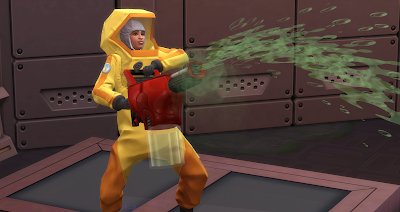 Ezra himself continued to spray vaccine on the weed to diminish its strength. 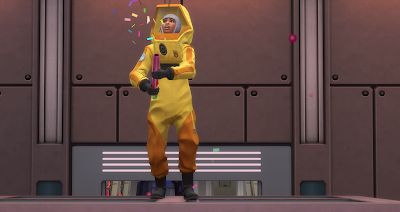 After several hours of intense fighting, the freakish flora was no more.  Ezra and his team had been victorious. 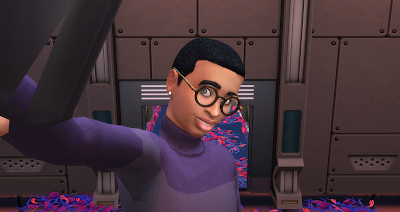 Being Ezra, though, he couldn't resist taking a selfie. 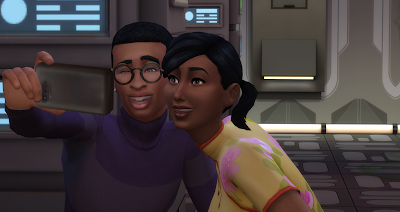 And he also took a photo with Lorna, the only member of his team who stuck around to celebrate.

When history beckoned, Ezra Woodley responded.  What does this young man's future hold after Strangerville?
Posted by venusdemilo at 5:48 PM No comments:

Yep, I present you with yet another 'story' - well not so much a story but a chronicle of gameplay.  It's from Sims 3 and called Vanderburg Squared. It follows the Vanderburg family from the Sims 3 store world of Hidden Springs and their born-in-game twin daughters as they come of age.
Posted by venusdemilo at 7:10 AM No comments:

This is a spinoff blog of Just Plumb Nuts, focusing strictly on Savannah Plumb's World Adventures trips. Savannah Plumb, for followers of JPN, is the fifth child (and only daughter) of Nathan Plumb. She is the narrator of JPN (her choice, not mine). The address is on the left.
Posted by venusdemilo at 11:34 AM No comments:

Just Plumb Nuts is the culmination of months of work. I've been playing this family since the beginning of Sims 3, through all its warts and etc., and now the blog site is here. Follow the hyperlink on the left to visit the site and to hear the family story through the eyes of Savannah, the plucky teenage girl of the clan.
Posted by venusdemilo at 8:43 AM No comments:

Greetings everyone!
Welcome to my NEW home on the web! Pull up a chair, grab a cup of coffee, sit back and relax. On the left are some links that you might want to check out. If you came here in search of my Party of One story that I wrote with Sims 2, it has moved to its own blog address, something I've been wanting to do for some time. The new address is hyperlinked on the left.
I am now in the process of creating a new blog site for a wonderful Sims 3 family, the very first one I created for the game. They have grown and changed in ways I never expected. In this space I will announce the blog address and updates as time allows. In the meantime, however, a forum thread has been created for this family HERE.
But before I go, I want to say that the Sims is just a game, albeit a very enjoyable one, but it truly is just a game. The stories that have been created with it have been written for our amusement and for others as well. They are not meant to infringe upon anyone's copyright nor are they intended as serious examinations of the human condition. They are just, well, stories about our sims, characters who either existed in our minds before the game allowed us to bring them visually to life, or characters that the game actually brought forth while it was still happening.
Thank you and enjoy!

Jill
Posted by venusdemilo at 4:58 PM No comments: